A Mom’s Response to GMO

Most of our blogs either depict the joys of our newfound homesteading life, or a baking tip I want to pass along for your enjoyment, or some geeky food fact that we find fascinating and hope that you do, too.  We never considered ourselves political people before getting into this business–but as we have discovered, food has become political.  We seem to be on the wrong side of those politics these days.  Would it not be easier to show a picture of a baby lamb and suggest our idyllic life as a romantic notion? Easier, but not ethical.  You see, when you discover a truth that could very well be killing your closest friends and family, is there not an obligation to stand up for justice?

We have yet to completely determine how we (just a small family-operated kitchen self-sufficiency store) can effectively fight for justice when so many more honorable, noble people (like Michael Schmidt, Alice Jongerden, and many others) have been fighting this battle for food freedom  with their very livelihoods — even lives– as they often face the threat of decades in prison.  I have little to offer, but I do have this–my personal philosophical response to GMO (Genetically Modified Organisms–“Frankenfood”).

If you have also arrived at some of these conclusions, please share some of your own reasons below this post.  Let’s discuss this together.

Because I give a rat’s….tumor….about the scientific data surrounding cancer as linked to a genetically modified diet.

The human construct of invincibility is a lie. 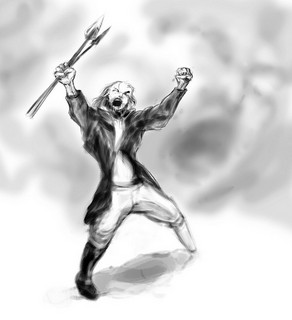 We strive to create the unsinkable Titanic.  If we could just create a plant that would not succumb to an insect, to a drought, to the crisis of the moment.  If we could just create a plant with higher yields or longer transit life….  Passion like that of Captain Ahab in his search for Moby Dick overwhelms the logical limits of what is within human jurisdiction.  The lines are blurred and societally we become a collective version of that  17 year old child with a driver’s license and a sports car.   Something that we intrinsically know on the individual level is unknown on a corporate one: there is such a thing as right and wrong, evidenced by the mere concept of “consequences”—that for every action there is an equal and opposite reaction, and that our push-and-pull on this world will push us and pull on us back.

Collective amnesia—the “Out of Sight/Out of Mind” phenomenon, that what cannot be seen cannot affect us.

Very similar to the Invincibility Shield, but the Invincibility Shield will ultimately recognize the possibility of travesty (the car could wreck—for someone else but not me).  The societal Collective Amnesia is denial, pure and simple.  The term “GMO” may mean something to an individual but does not have practical application to the plate simply because –squirrel—that was then and now is now, and now is a steamy plate of chili cheese fries.   I remember taking our family dog to the vet, who was a mutt intelligent enough to know a needle when he saw one.  The vet would draw the needle, holding it menacingly in the air.  The dog’s response was clearly that if he could not see the vet, the vet could not see him—he would bury his muzzle deeply into my chest and have the greatest surprise at the sting greeting him at the other end.   If we cannot see the GMO—on the label or otherwise—then it is not worthy of another thought.  The pleasure of the moment (the food at hand) is our immediate temptation and our immediate concern, not the contents thereof.  I saw something on Pinterest about GMO once, but that wasn’t now. 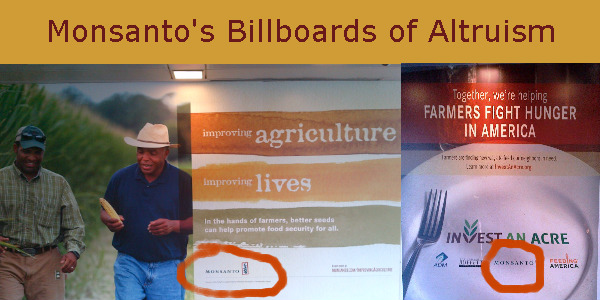 The companies that create the GMOS are the ones with the rather expensive campaigns touting the “American Farmer”  showing pictures of children in cowboy boots, staring over a corn field with Farmer Daddy.  Such unspoken messages of legacy are very real messages indeed—never mind the irony that it is given by the companies who sue farmers for saving seeds or for harvesting plants that may have been inadvertently cross-pollinated by their poisonous ones.  Oh, they are leaving a legacy alright, but there will be no Iowa farm for that boy or for the generation after him.   Years of chemicals, mono-cropping, over-tilling, and the loss of ecological diversity have killed the land and depleted the topsoil.  The real work has been done for centuries by the microbes and underground life teeming with nutrients and aeration for that land, but those are long since strip mined. And for what? Higher food prices and more ethanol subsidies (but I repeat myself). The price of a bag of groceries to the consumer is up and the take home to the farmer is down. No, I was not the first one to notice that.

So while Monsanto and the others (Monsanto is not the only one!) give you the pictoral vision of legacy, they are co-opting the argument to claim for themselves the very thing they destroy.  At the end of the day, you have to decide how much scientific evidence supports the propaganda that they are improving the state of our health and our land—or not.  And at the end of the day, I want my children to put seed into the ground and get a life-giving food as a result.    Will they have that opportunity? I speak out as a Mom to all the farmers trapped in the spin cycle who are likely fathers themselves. Who wants to destroy a farm’s greatest asset, namely its top soil and fertility for today’s profit when tomorrow’s generation will inherit the second dust bowl. 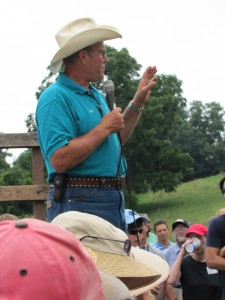 Picture from Polyface Farm: Joel Salatin is giving a tour.  Farm tours like these are common all over the United States.

Oh what a tangled web they weave between public and private job titles!  The back-and-forth of government positions to corporate execs is dizzying.  The disappearance of evidence, the shutting up of the evidence, the laws that pass in the dead of night against the citizen seeking governmental independence from their personal agricultural pursuits….if GMO is so noble, so life-giving, why is all this legal racketeering needed pray tell?  The only transparency seems to be coming from the local family farm.  We could cite Ag-Gag laws from every state saying that photographs of CAFOs are illegal, or we could relay multiple cases of dead-of-night ordinances rezoning farms that ultimately shut their barn doors, farmers being followed by unmarked cars or under survelliance as they plant their fields;  we could talk about the unannounced confiscation of animals with the claims they hold diseases completely unknown within the animal breed nor are they tested prior to their annihilation.  If you follow this stuff at all, you know of case-after-case-after-case-after-case.  If not, get to know them.  And then go to Farm to Consumer Legal Defense Fund and become a member.

What are your reasons?  Which ones did I forget to mention? Leave a note and explain your reasons against GMO.

Let’s leave a legacy for our children, 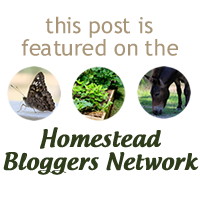 Unless otherwise stated, all photos are property of Pantry Paratus, so please keep proper attribution if you share them in any way.