What if I told you that we could completely eradicate world hunger without growing another grain of rice?

In high school, I read a book about how my love for meat was the cause of world hunger, and if all of that grain could just be put into the hands of starving people, we’d hold hands and sing…something.  Probably a bad promo-project song where all of the world’s pop stars join forces to create pseudo-change by creating pseudo-awareness.

And so in all of my altruism towards those in poverty, I spent the next year meatless (except fish, because I reasoned there was enough of that and they aren’t grain-fed).

I ate a lot of soy that year–monocropped soy that ruins farmland, kills the habitat of all of those fluffy bunnies we love so much, and it nearly ruined my gut.  But did I actually help anyone?

I would propose to you that the problem of world hunger, in all of its complexities and for all of its causes, could be eradicated by eradicating food waste.   How to eliminate it? That is far more complex.  War is perhaps the leading contributor to world hunger, since developing countries in conflict have hunger rates three times higher than the rest of the world,¹ and 65 million people have been displaced by conflict as of the end of 2016 (the highest since Hitler).  War’s evil twin is poverty, and the World Bank estimated in 2012 that 896 million people live on $1.90(US) a day or less.²

There is movement in the right direction, however, with the decreasing numbers experiencing world hunger.  I’ll reveal my personal bias here and say that I don’t wait for government to solve these problems.  Too much red tape, too much showmanship, too easy to spend someone else’s hard earned cash. They tend to vote for what’s popular in lieu of what’s effective (such as school feeding programs that only touch less than 15% of the poor² over agricultural development in poverty areas, which is proven to be five times more effective than any other initiative²).  In fact, the U.S. has supported global food programs for years that have done nothing but line the pockets of the elite while the impoverished keep starving. So here we are faced with a choice: complain about government’s inefficiencies or examine our own.

We need to have the discussion about our roles as consumers and as food producers: 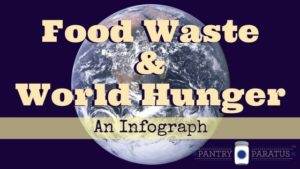