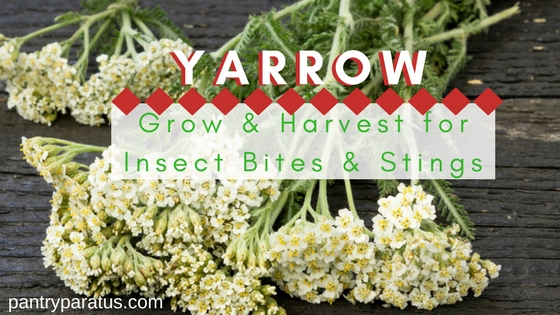 I started beekeeping with two hives, and one was very calm and docile.  The other? Uh, no, turns out they were Africanized and put me into the hospital.  That’s another story you can read about here.  But until we actually figured it out, we were finding ourselves with stings from just “more aggressive than normal” bees.  Of everything we tried to soothe our skin, our family found Yarrow to be the most effective non-drowsy option. 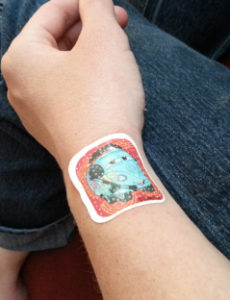 My reactivity to the stings grew throughout last summer.  The first sting was a bit red and stung for a day.  With each sting, the swelling and pain increased.  If you are curious about allergies, definitely read this article where we dive into that subject more fully.

With a yard full of Yarrow, I didn’t start there.  I honestly didn’t know what that fuzzy fern-like weed was that we had growing by the back fence (ironically, right next to the hives).

With the first stings, I started with over-the-counter Benedryl cream.  It was soothing for the first 10 seconds, but then felt sticky on the skin and provided no further relief.  Over-the-counter Calamine lotion didn’t help any longer, either.  I like the results from just straight honey, but it’s a mess and not practical for someone who cannot stop moving.  Honey is such a mess that you now have to bandage over it somehow.  I used Colloidal silver gel, and that was a good option for me; I think everyone should keep a bottle in their kitchen for quick attention to burns.

All along, the solution was outside, next to the hive.  The bees loved it, too.

The U.S. National Library of Medicine grows Yarrow in their Official Herb Garden, and here’s what you need to know to consider doing the same.

My mother gave me a Holy Fear of Hemlock, and I was to eschew any long stemmed white weed.  The differences are really quite clear, but I suggest you find examples of both and learn both so that you minimize any confusion. 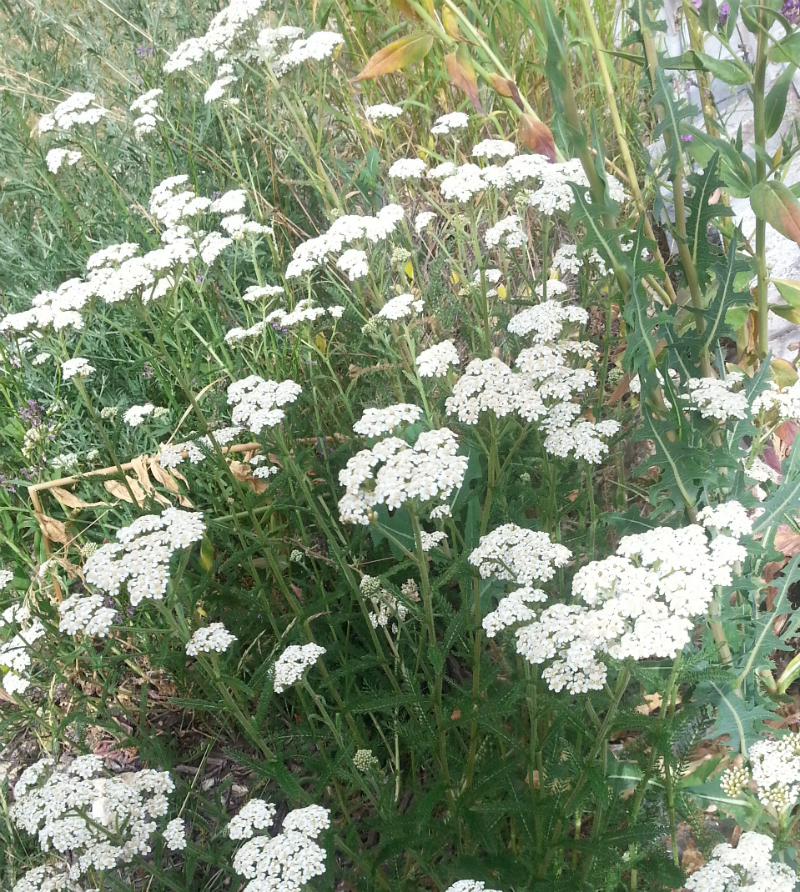 Here are just a few quick differences, but you bear the personal responsibility to research this further before utilizing anything in a medicinal way:

Yarrow grows throughout North America and Europe (it’s homeland), and it blooms nearly all summer.  It’s a common roadside weed, but it can also be purchased at large plant nurseries.  Although you can certainly grow it intentionally, it spreads horrifically.  It has actually spread throughout my yard, but I’m not a lawn person, so I figure–hey, it’s green–and move on.  It’s easier to keep green in my yard than the grass is, so I don’t mind it.  It’s drought-resistant and a great cover crop to prevent erosion.

Yarrow’s Possible Side Effects and Uses

If you are pregnant or breast-feeding, do not use Yarrow! One of its benefits is that it is a muscle relaxer and it can affect your uterus.   If you have a blood or blood-clotting disorder, do not use Yarrow without consulting a medical professional.  If you are allergic to ragweed or to any flowers in the daisy family, don’t take it or use it.  It is not healthy for long-term oral use (can cause photosensitivity and other side effects in the long-term).  Heck, if you are just not sure about it, just don’t use it, but WebMD has listed it as “likely safe” for most people, and that’s taken orally, which brings us to its uses.

For more information, read this article by the University of Maryland or Perdue University.

Yarrow as an Instant Poultice

Yarrow is a coagulant, meaning that it can assist in stopping bleeding.  In fact, the plant was named after Achilles, a Greek hero who stopped the bleeding of his soldier’s wounds (Achillea millefolium). It also has astringent and antibiotic properties.

This is good hiking/camping first aid.  Chew some of the fern-like Yarrow leaves up (bitter flavor), and then place the wet, chewed leaves onto the cut, applying pressure with your hand.  This is not true medical care (seek a professional as needed), but can help in a pinch when a bandage is not available or you are waiting for proper treatment.

In Germany, they make a tea of Yarrow, and then dip a clean cloth into the tea and use as a compress. 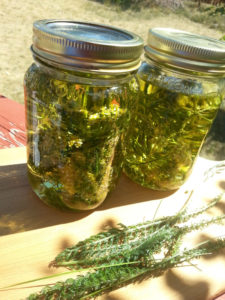 Yarrow Oil is actually very volatile.  You can buy the oil, but make sure you are storing it properly.  You can, alternatively (and this is what I do), make a tincture from it.  Use it orally for a mild case of insomnia or digestive problems, or apply it topically to cuts, scrapes, or stings.   Remember to limit frequency of oral use though (don’t use it daily).

For Yarrow, you’ll need an alcohol that is at least 80% proof; people recommend Brandy (probably for flavor), but I use Vodka for our tinctures.  Bruise or tear the flowers and stems, filling the jar about 3/4 full.  Pour in about twice as much alcohol, ensuring the plants are below the liquid line.  Store in a dark, cool place.  Check on it at least once a week, and shake it.  After a few weeks (2-3 weeks), your tincture is ready for use, and it will store for several years.

Dry Yarrow leaves (or use them fresh), and put a few leaves into your “time of the month” tea, or drink it when suffering from insomnia.  Warning: the leaves are bitter, so you’ll really need to doctor it up with some yummier things, like chamomile, licorice root, and honey.   Some people also put fresh Yarrow in salads. 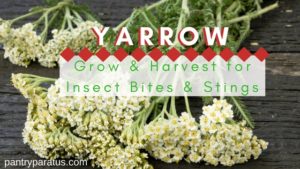 Remember that it is your responsibility to consult a medical professional.  This is not medical advice; this is a “what works best for me” article based on centuries of traditional plant use.