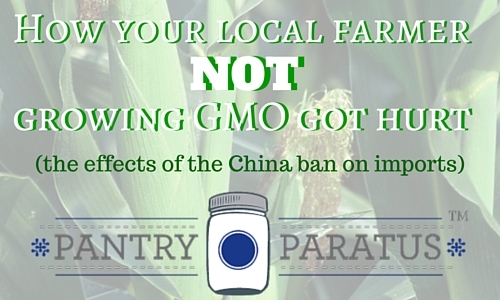 That is the number of corn acres in the United States.

That’s how much of it is GMO.

If you are a farmer, please leave a comment with any corrections or opinions you may have to shed light on this subject. I write any of this at all in an attempt to help the non-farmers in the crowd understand the world in which you live.  The rest of us are just average Americans, maybe growing a garden or two. We know about GMO slipping into our food stream—perhaps that’s even a motivation as to why some of us even garden at all. I would like this to be a conversation.

The Role of Exports in Corn Farming

We know that corn is present in nearly everything Americans eat from the grocery store; that doesn’t mean, though, that much of our 80 million acres goes to that purpose. Actually, less than 20% of it does. Most of it is used for animal feed, both in the U.S. and abroad. Somewhere between 11-15% of our homegrown corn is exported, but that is a moody market and the numbers are very unstable.

This is where I introduce the antagonist to the story—or is it? China has entered our story before, and what they eat is often hideous; what they import to the U.S. is downright scary. But if a person is to believe our own agricultural press, we see that China is the temperamental character in this story, since they stopped importing all corn (haven’t since 2013) from the United States because of the presence of a specific, unapproved GMO corn variety. This has meant major losses to some of our family farms, because they rely heavily upon the import market to keep market prices stable.  In fact, it may be said that it isn’t China that is moody but the corn pricing system altogether–such a major monocrop is naturally vulnerable to shifts in market.  And honestly, it isn’t just China that is pulling out of the GMO game.  All of Europe is looking at the U.S. farming economy with a distrustful eye these days.

Basically, it’s this: some farmers choose to grow GMO, and many more are attempting to separate themselves from it altogether.  But regardless of what they grow, they are all competing for the same market share.

America knew that China had not approved this specific GMO corn, but the corn shipments were laced with it, which is when the full America corn ban happened, which multiple shipments being turned away.

Corn from thousands of small farms are all consolidated when passing through regional terminals, similar to how a single milk truck travels farm-to-farm.  There are different strains of GMO corn from different manufacturers, some of which were approved by China.  The problem with Syngenta’s strain (Agrisure Viptera) is that it was not approved by China, even though it had been approved in the United States.  Some argue that Syngenta should never have allowed a strain not approved in a foreign country to be on the loose in our own.  It was approved in America, and they were selling it to American farmers.  I have difficulty understanding how a judge would find them guilty in such a case, but then again, I’m not a lawyer.

GMO Corn Exports: The Lawsuit & The Nefarious Companies Behind Them

The lawsuit is against a specific Big Ag company named Syngenta, which was the manufacturer of the modified strain found throughout those shipments.  Cargill is a major force behind the lawsuit, because they are the largest exporter and have suffered a financial loss as a result.  I personally find it ironic (conflict of interest, perhaps), knowing that Cargill is also a manufacturer of GMO corn varieties.  They are propelling these lawsuits forward against their competitor, stating that individual farmers have had much loss due to the unapproved corn variety reaching Chinese exports.   The farmers are being recruited by several major law-firms, which stand to gain nearly 40% of the individual wins that such a case would yield.

GMO Corn Exports Halted: What This Means for Family Farms

The specific strain of GMO corn that led to this mess has since been approved by China.  However, the damage has been done.

Many farms feel locked in to corn, spending millions of dollars are crop-specific equipment.  The simple answer for a city-girl yuppie (former although I may be) is, “well, goodness, just diversify, go polycrop, or switch from corn.”  It just doesn’t work that way for thousands of family farms that are indentured to the seed companies, mills, and equipment holdings. See the conversation farmers are having about what the GMO corn fiasco may or may not mean to them.  This singular instance of China’s import rej

I would implore all farmers to reconsider the use of GMO, period.  It is true in some instances that these Frankencrops are able to withstand some pests and diseases better than monocropped non-GMO varieties.  Or so they say, but with the advent of pest-controlled GMOs, farmers use up to 15% more pesticides.   The natural processes of diversification prove effective without the destruction of soil or of wildlife.  There is less risk of being stuck with a crop that won’t export to Europe other places.  And at the end of the day, you can be confident that instead of affecting the nervous systems of animals or people, you have provided clean nourishment for our society.