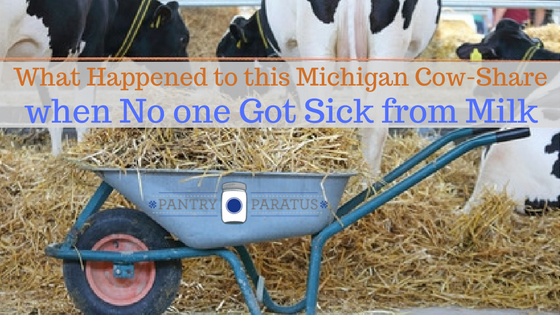 “I knew I wanted to convert our conventional dairy to a cowshare,” Kris offered. “It was in 2005 when the Michigan State Police ran a sting operation against a cowshare farmer, arresting him and ruining $7,000 of food by having it abandoned on the side of the road. It was a legal cowshare operation.” 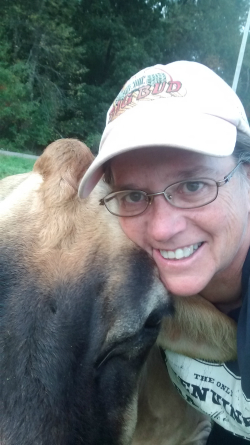 Kris and her husband own a dairy farm just outside of Cohoctah, Michigan. Kris farms by herself; her husband has a full-time job. She works harder than anyone you may likely know, and she’s feisty.

“I am the only one working the farm now,” she laughs, “but the cows make fantastic employees. They show up to work every single day.”

From Conventional Dairy to Cowshare

Kris’ conventional operation ran through the “Association,” the dairy monopoly that requires all milk created on premises be turned over to them.  The farmer’s family may consume it, but no milk may be sold apart from the association or the farmer is kicked out.

Kris decided she had enough of this coercion in 2007 and converted her operation to a legal cowshare.  Cowshare means that other people own or lease cows and pay a boarding fee.  Kris maintains the animals’ care and uses her high tech milking equipment (the same used for the conventional operation).  Every family is assigned a day to collect their milk.

On the Unger’s farm, the 297 families often drive over an hour to get there.  They fill their own containers from the stainless steel holding tank, which keeps the milk at the perfect 34 degree temperature.  Although it is legal in Michigan to do delivery, Kris simply doesn’t have the time or the desire. “People need to have a connection to the farm and to their own animals,” she asserted.

When I gawked at the number of 297 families, Kris told me, “I should really send a ‘thank you’ note to the Michigan Department of Agriculture, because every time they cause problems, my cowshares grow. I increase by 10 families whenever they hassle anyone.”

The word “hassle” is an understatement.  Kris is not alone in her story of governmental overreach, especially in the fine state of Michigan.  For her, the trouble started when a dad, son, and an overnight friend got sick.

The mom made tacos “so they wouldn’t get food poisoning” at the Detroit Tigers game that evening.  The boys and Dad loaded up on food at home, and on all the goodies at the game (in spite of Mom’s concerns).  The dad and son didn’t feel well for a few days, but the overnight friend became very ill.  His first hospitalization was for e-coli, the second for complications from the previous hospitalization.  When the health board called, the family answered the raw milk question honestly, a question that always appears at the top of the list on the Health Department’s questionnaire.  No one remembered the guest having any raw milk.

Not one member of 296 other families became ill.  The only commonality to the sick boy (likely without the milk) and the father/son (likely with milk) is that those three attended a ballgame together.  Remember, Mom also ate tacos and did not get sick.

On October 26, 2016, officials came to the Unger’s door demanding lists of all cowshare owners forgetting that under our judicial system they need a proper warrant for such “fact finding” efforts.  When they came back with the warrant on September 1st, they also did an “inspection,” which would be more aptly labeled “contamination. “ 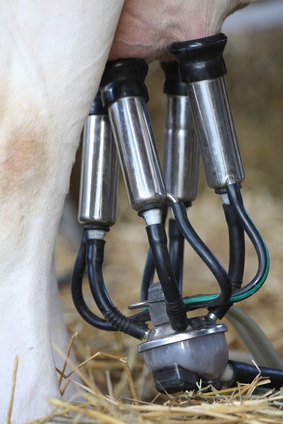 The inspector’s conducted their “collection” without hairnets or gloves, leaving machinery valves open as the security cameras in the barn later revealed.  The coup de grace that this was a “professional investigation” was when one inspector unprepared to vault himself to the bulk tank’s lid, opted to stand on Kris’s coffee table (until her objection) and insert his upper body (without gloves or hairnet) into a food storage vat.   An inspector from the Department of Agriculture needed to “check the cows”, but wouldn’t get closer than 20 feet away, never taking a manure sample.  Brilliantly, he declared, “They look okay.”

A lot of food wholly unconnected to E.coli (or to the “okay” cows) was disposed.  This food is legally produced and privately owned. All in all the toll was $360 of honey destroyed, 2 dozen eggs confiscated, sauerkraut dumped, $610 of butchered chicken absconded, and (in an effort to protect the general public) cookies and apple muffins were properly dealt with (read: “stolen) to uphold the law.

Kris asked the inspectors, “If one of my families had a baby and everyone left meals for her, then…”

“…then you would be illegally warehousing it. Against the law.”

Legal culture develops out of property rights; this has held true for centuries of stable common law.  The fact that there is an agency inspector presupposes that there is a just law to protect in the public’s interest, even to the furthest extent of organic cookies and apple muffins.  I am sure that the Dept of Ag inspectors for the great and beautiful State of Michigan had to take some science classes with labs, so where is their adherence to sound scientific practices?

Does legal angst forego getting a warrant (editor’s note: rookie mistake) or proper field sample collection?  Since when is it in the public’s interest to contaminate and therefore ruin a bulk tank of milk without using aseptic collection methods?  Are nitrile gloves not in the budget for the Great Lakes State?

Let’s try out a hypothetical: let’s say this well-meaning inspector got his ungloved hand in the milk sample after not washing his hands in the restroom—of course the milk will test contaminated for coliforms!  It is far from just law to stand behind a legal fog of scientific principles poorly applied by those chosen to defend the common good.

Kris continues to operate the farm but there are a lot of unknowns in her future.  She does have legal assistance from Farm to Consumer Legal Defense Fund.

Kris is being sued for the cost of the food disposal.  She has pending court hearings and does not know what the outcome will be for her or for the 297 families that depend upon the milk from their own cows.

This much she does know, “We have a community here, a wonderful community.  The government could never understand that.”