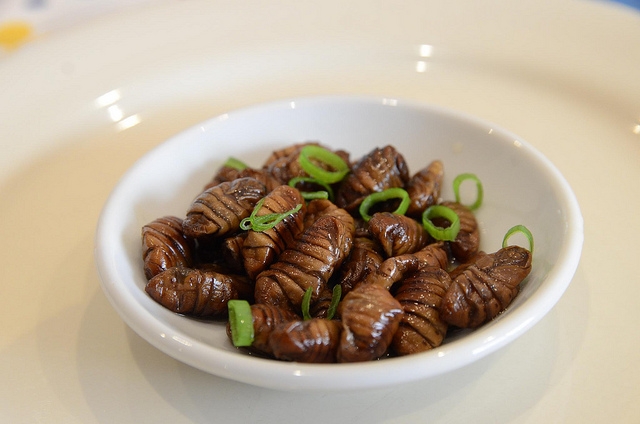 This is the most self-deprecating thing I have ever posted online.   But you know what they say: If you can laugh at yourself, you will never cease to be amused.

My interest in this topic started with one of only a handful of regrets I have obtained through life. I’m just not prone to regrets, apparently, given that this makes that short list.

The only food I have ever passed up was merely denied because of insect-status.  I’ve eaten all types of wonderful, disgusting, even exotic things through travels to South America, Africa, Russia, and Europe.  My singular food-declination were the fried caterpillars of South Africa (maybe it was Botswana?).  I nearly ate one until someone beat me to it and I heard the thing crunch.

We all knew we were ingesting an occasional bug part anyway, right?  Back in 2012, the FDA modified the stance to allow up to 225 bug parts per 225 grams of pasta.   I find that number shocking.  That golden-brown hue of the “whole wheat” might be something else after all.   If you eat foods with synthetic ingredients and food dye, you might be getting some bug parts.  For kicks and giggles, research “Red Dye #40.”  If you had a flu shot this year, it might have been formulated in insect cells that were infected with disease.  And you never even knew that, did you?  But would anyone eat insects intentionally?

Several years ago, the idea of eating insects was the new-old thing.  People have been eating them since the beginning of time–and it’s a fabulous alternative to starvation– but it somehow became a fad in 2013.  Marjory WIldcraft (a name many of you will likely recognize) has been encouraging people to know and consume edible insects for many years; people started listening.  Specialty chip companies sought and received FDA approval for the inclusion of insects, and there is no shortage of chocolate-covered or chipotle-flavored varieties online.  Insects are a very cheap source of protein and that logic seems obvious, but Science Daily gives 7 reasons that eating insects might be a worthwhile idea.   In 2014, Ghent University studied this sudden change in bug cuisine acceptance, and they determined a few things: they found that men who have a weak association as meat eaters and who are also environmentally conscious are the biggest crowd to jump into this new diet–up to 75% of people who fall into that category are ready to start crunching!

This video was taken several years ago when I attended a two-week permaculture design course.  Excuse the rough video; I just came across this and thought it would be fun to humiliate myself on the internet.  I determined that I would not again pass up on the opportunity to try something offered to me.

Interested in learning what insects are viable dinner fare? Or maybe you’re curious for the gross-out factor.  This website gives you both (the banner image at the top is eeky-gick).  Scott Booth, a customer of Pantry Paratus, has a personal expertise on the matter, and this is what he has to say (about ants tasting like lemon):

Depends on the ant. Some have enough fomic acid that they have that sour taste like lemon. Others, like honey ants, drink nectar and taste bittersweet. Some, like big carpenter ants are unpleasant to eat and have a nutty taste with bitter overtones. Same with termites. The eggs don’t have much taste but have a texture like squishy rice and an unpleasant odor, much like the larva or maggots. Grubs might be nutritious, but are really vile tasting with a consistancy of tapioca with a slightly hard jelly-like shell. You are better off roasting them for a few minutes if you can, but it won’t help the smell or taste, just firms up the gooey insides. I don’t recommend crickets, hoppers, or beetles simply because of the scratchy nature of the shells as they go down. You will be hard pressed not to puke from the irritation to your gag reflex. Always chew the live critters completely, no matter HOW disgusting. The last thing you want is something catching in your throat with pincers or claws and trying to crawl its way back out. Chewing a worm or bug is pretty nasty stuff, dead or alive, but you have to get past the bias and work through it. It’s survival, not dinner at McDonalds. The fat and protein content of an insect is higher per ounce than beef or chicken.

Think I just lost my appetite,

UPDATE:  After humiliating myself on this blog, I was asked to write more about the subject.  If you are interested in learning more about eating insects (or at least, the reasons most of us object to it), read here.

4 thoughts on “Tastes Like Lemon: The Time I Ate Ants (& more about eating insects)”